Tweet
Share
Pin
0 Shares
Yesterday, I mentioned my quest for Arline’s great-grandfather Henry M. Winsor. I could easily find the Union veteran after 1850, but I could not find Henry’s home in the years before the 1850 census.

Then I found CensusMate, a handy census utility by John L. Haynes that stacks data in a grid for easier analysis. Instead of the typical individual census extracts, Mr. Haynes proposes a timeline arrangement for data from pre-1850 censuses. Males are placed on one line, with females listed below using the same age brackets. This allows the researcher to follow a given individual from decade to decade and to see patterns within family groups. 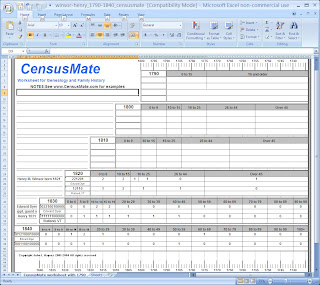 In addition to free census forms, Mr. Haynes also provides careful examples with explanatory notes. His sample family provides an understandable key for using the forms in your own research.

I applied Mr. Haynes principles to my study of Henry Winsor using the family of Henry’s guardian as my subject. Would Henry fit into this family grouping?

In 1830, when Henry was 9 years old, but one year before Edward Dyer was appointed his guardian, the Dyer family could account for the children in the 1820 census PLUS 2 boys and 1 girl 10-19, and 1 girl 5-9, as well as older adult children.

My ancestor, Henry M. was 9 years old in 1830 and does not appear in Edward Dyer’s household. Perhaps he was living with a relative or neighbor until the court order of 1831 appointed Dyer as Henry’s legal guardian. In 1840, Henry could have been one of the two 15-19 year olds listed in Dyer’s household. Where did the other boys come from?

I wonder if Edward Dyer had the social and financial standing to act as a guardian or foster parents for other children. In 1820 the Dyers had 3 children age 0-9; in 1830 these 3 children should have fallen into the 10-19 age bracket; however, this age group shows a total of 6 children. Again, in 1830 the Dyers had 1 child under 9; in 1840 they had 4 children 10-19. It looks like the Dyers were taking in the children of relatives or others in the community.

By using CensusMate, I discovered a new avenue of research: the Edward Dyer family. A brief Google search shows numerous hits; the Dyers seem to be a well-established Vermont family. Perhaps further research will lead to information about their children and household, and maybe even my elusive ancestor, Henry M. Winsor. Thank you, Mr. Haynes. CensusMate is a GEM!