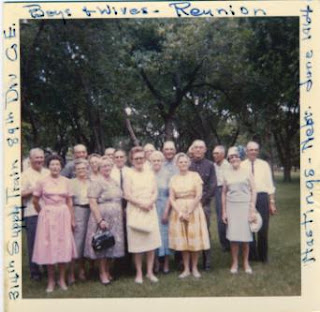 The Magic Cupboard hasn’t lost it’s sparkle, and once again revealed a wonderful surprise for the Treasure Hunt Challenge. Usually I find treasures from my maternal grandmother, Arline Kinsel, but this cupboard held memories from my father’s side of the family. First, I came across a vacation photo album from my paternal grandparents. My school-teacher grandmother was meticulous in all things, and her photos are carefully labeled with subject, date, and place along the white border of the snapshot. It’s a good reminder of an easy way to identify photos, and probably a reason to return to the old-fashioned border prints instead of the more common borderless style.

At the back of The Magic Cupboard I found a companion treasure — a little six-ring notebook with my grandmother’s Bible Study notes and a packet of loose pages from another memo book. Those loose pages were a travel tournal for trips in 1962 and 1964, corresponding to the dates and photos in the album. Now, that’s a Treasure. 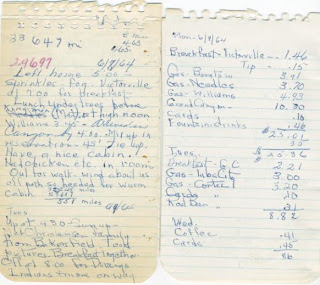 She also kept an expense log at the back of the packet of notes, and itemized her expenses for that first day

From the Grand Canyon, Walter and Edna traveled through Durango, Colorado to a reunion in Eagle, Nebraska.

As I looked at the photographs, initially I thought the men and women, “Boys and Wives,” were gathered for a family reunion; fortunately, the notes identify the photo of men and women in the photo with the 314 Supply Train, Co. E, 89 Div. This must be my grandfather’s WWI Army unit. Tucked behind one photo of men taken in 1964, I found a second photo of the same group taken in 1963. What unexpected clues to my grandfather’s military service. 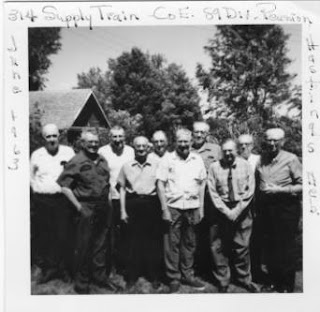 The return trip brought them through Torrington, Wyoming and Grand Junction, Colorado before arriving home in Santa Ana, California on June 25.

The website, Flashback 1964! highlights the tunes, the tv shows, and the trends of the year. What fun to think that as my grandparents were cruising west in their Plymouth four-door sedan they might have been listening to the Supremes croon “Baby Love” or The Beatles “A Hard Day’s Night,” although they were much more likely to be listening to the news or the Billy Graham radio hour. Gas was 25 cents a gallon and they could fill the tank of the Plymouth for $4.93. This year, I paid nearly $5.00 for ONE GALLON of gas. Of course, in 1964 the average yearly salary in the United States was $6,080 but those do seem like “the good old days.”